How We Began Our Homeschool Journey

This post was written for inclusion in the monthly Homeschool Blogging Carnival hosted by Lisa at The Squishable Baby and Keisha at Unschooling Momma. This month our participants are introducing their homeschools and styles. 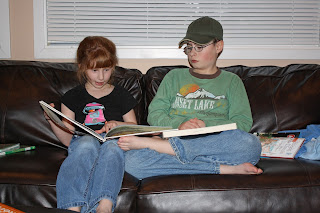 (this was taken several years ago, where does the time go?)

My name is Joy from Who's learning? Who's teaching? and we have been homeschooling for the last 7 years. Before we became parents I had always had in the back of my mind that I wanted to homeschool when we had children. It took us many years to become parents and once we did we were blessed with A~man who was 4.5 months old, as a foster baby. He has Prader-willi Syndrome, autism and ADHD. After becoming mama to a child with special needs though I didn't think I would be able to homeschool. Wrong. He went to a wonderful public school preschool that provided occupational, physical and speech therapy. Once he entered kindergarten things went downhill. Halfway through his kindergarten year we were told he had to go to a different school. Before this we were never told there was a problem. The next school/classroom was a nightmare. He was being treated as a child that was a behavior problem instead of a child whos behaviors were caused by his syndrome. Continually I was being called to come pick him up as they could not control him yet they wouldn't let me in the classroom during school hours to see what was triggering his issues. Finally, I was called and I told them to gather up his belongings as I was taking him home...and home is where he stayed.

Our daughter Z~girl is just 22 months younger and was another wonderful blessing as we were told that I could not conceive without IVF. A year after A~man came to live with us I found out I was pregnant. When I removed A~man from public school mid year our daughter Z was going to a preschool at our church. I continued her finishing up the year there while I started our homeschool journey with A~man. His journey started with a couple of weeks off because he had become so beaten down emotionally from school and he needed to learn that learning could be fun again.

Our learning style is completely ecclectic! In the mornings we use an online curriculum which leaves our afternoons free for the kids to pursue their own interests. In a perfect world I would have picked a Classical Education but I have learned you cannot pick your homeschool style. It will pick you, haha. We read lots and lots of books, spend a lot of time in nature, my daughter plays the violin and fiddle, and my son loves to play his drums and guitar. Both kids love to use Lego to learn. All of us also love art and entering it in our local state fair. Right now the job that my husband has allows him to sometimes take one of the kids with him. Not only does this give me a break but because he is currently a handyman the kids also are becoming quite handy! If anything needs fixed and my husband is not there my 11 year old daughter can now fix about anything!

We will be taking a month or so off from our online curriculum but we pretty much homeschool year round so we will just be taking our learning more outside and hopefully we will have many fun and educational adventures this summer.

Visit The Squishable Baby to see how you can participate in the next Homeschool Blogging Carnival.

Please take the time to read the submissions by other Carnival participants:
Posted by Hills N Valleys at 5:24 AM