AKA as SUPER DOG! honestly this dog is beyond a dog. He is so patient. The kids dress him up (gently) and he loves the kids so much. He has put up with a lot of nonsense at times from the boy so we really watch A~man closely.  His only vice is he bolts out the door at any opportunity only to return hours later smelling like he has been frolicking in the bog of eternal stench!! 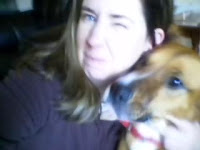 Giving me a smooch! 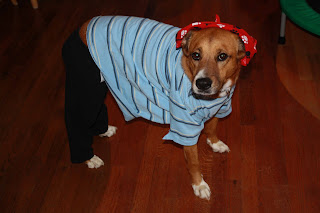 I better get a bone for putting up with this! 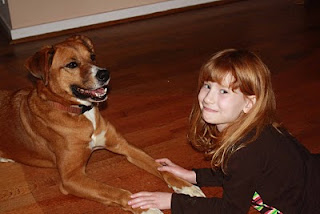 Look at that doggy smile!!!
Oh and today he was wearing a santa hat and scrub pants....I didn't get a picture of that!
Posted by Hills N Valleys at 9:05 PM 4 comments:

On the hubby's day off we have often times been going swimming at a health facility we are members at.  Our house has a pool but meh....we could not afford the money for a new liner and maintenance this year. (or last year when he broke his hip) When we moved in 5 years ago and plunked A~man into the pool by golly he could just automatically swim. Now they did have lessons years before that but more of water safety/getting used to the water as toddlers. The last two years he hasn't had as much interest in swimming. He likes to float and splash but that is about it.

Today he got a wild hair! He swam the length of an olympic size pool 5 times! now he did rest inbetween...I made him! He kept saying "I'm going to do THAT again!" I figured out he had been watching the adults in the lap lanes and was trying to mimick what they were doing. (a crawl type stroke he has never done) That blew me away! He learns so well by watching and doing! I can swim....I normally use the water barbells or do some excercises opposed to swimming. I do not think I could learn a swim stroke by just observing! The fact that he did it 5 times???!!! Ok I AM  bragging! Next time I am bringing my camera. I am also going to look into special olympics swimming...he was swimming faster than his sister!!
Posted by Hills N Valleys at 9:17 PM 3 comments:

or is it back to non school? Anyway today was our day back from a couple months of  having a very relaxed schedule. Z~girl has been begging to start back as she is very motivated to learn. She has enjoyed reading her books but she needs MORE. A~man? He would never admit it but he needs more of a schedule than he has been getting. He was less than enthusiastic this morning. I am trying my best to mix in physical activity between tasks. He has to move...honestly even though I am not hyperactive (hahaha wish I had a bit) I need to move after awhile or I get very sleepy and can't pay attention. This is how A~man is.

For curriculum we are continuing to use Handwriting Without Tears (A) and A Reason for Handwriting (Z), Mystery of History, Christian Kids Explore Earth and Space, continuing with Mastering Mathematics, and I am hoping to add on Easy Grammar, and All About Spelling in a couple of weeks. For reading/literature/phonics I use a mix and also wing it as this is my favorite subject. Oh and I picked up an older Switched on Schoolhouse 4th grade math/grammar for Z for a good price today. She isn't ready for the math but the grammar will be perfect for her to do independently. I'm sure I have missed something...oh ART/SEWING/COOKING well that is my favorite thing to do/teach besides literature! Here is Miss Z working on a pioneer bonnet. We are hoping to enter a couple sewing and art projects in the fair next month. A~man did an awesome painting last year that won a blue ribbon in the special needs category. 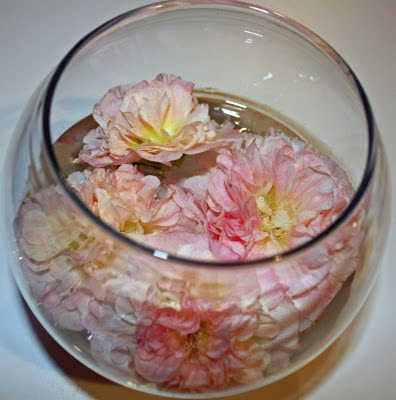 Today was the finale of A~man's daycamp program at church. I feel a bit guilty as I have not sent him as much as I normally do so he missed out on a lot of events. Well he missed out on church events...as a family we have had many wonderful events.

The presentation just made my heart swell! They demonstrated some of the activities they did during camp. The games they played and what it taught; patience, thinking of others above yourself. It showed the higher functioning campers helping the lower functioning campers which resulted in them benefiting mutually. They sang songs together and then....some had solos! As I was listening to such songs as "Jesus Loves Me" coming from a young lady with severe CP I got goose bumps and tears...infact listening to all of them...their expressions and their genuine love for God caused me to keep goose bumps. The reaction they showed to applause was so fun to watch. They were so proud. The whole time I just knew God was watching with love and adoration of these adults and children. His perfect creation made just how he wanted them to be.

The people in charge of this program at church are so selfless and giving and most are volunteers. Such good examples of how God wants us to be.
Posted by Hills N Valleys at 7:29 PM 4 comments:

Sometimes as a parent of a special needs child you have to let go...even if it is for just a bit. When A~man goes to daycamp (two mornings a week) that is my attempt. As much as I would love to be I am not going to be able to be by his side forever protecting him and stepping in when his judgement is not enough. Today was such a day.

Tonight was hubby's night off and we went to eat at one of our favorite spots. With the conversation between hubby, son, and I  we realized ds had TWO LUNCHES at daycamp...at least. I send him a plentiful healthy lunch.Today evidently they had hamburgers/hotdogs/french fries etc. That would have been ok (I would not have been thrilled) but he had that. Plus somehow he ate everything in his lunchbox.  Did A~man get in trouble....no.  If I was as hungry as he probably gets and had the food I would have eaten it. Anyone would have. BUT he has a person that goes to daycamp one on one with him and somehow this happened. I'm not a happy camper. Where was his helper???Only someone with a child who has PWS could understand this. Now if that happened with my Z~girl I would have been just fine.

Now internally I am fighting myself...knowing he HAS to be away from us at times....but gosh trusting someone with your sn's child is TOUGH!!
Posted by Hills N Valleys at 9:05 PM 2 comments: