Spring has us climbing trees!!!

Ok it has Z climbing trees and me revisiting my memories of childhood. She is such a monkey...always has been...and very coordinated. (me not so much) She was in ballet in preschool...started to try gymnastics (she would EXCELL she has the perfect build for it) but not interested. She is more like her mama and likes to stay in tune with nature. I remember as a child her age climbing up these giant pine trees in my grandma E's front yard (some type of evergreen anyway) WAY up....scarey up....as no one was watching me.

So we had some very warm days here in NC earlier this week and after doing some "school work" (there has to be a better name for it ;) the kids spent several days out in our yard...with me supervising out the window and going outside. I saw Z scaling the tree and HAD to get pictures. For what it is worth this is the first time in forever she picked out a skirt to wear. (she had cut off shorts under btw ; ) She loved wearing the skirt and wants me to make her some for this summer woohoo! I thought she was done with me sewing for her and skirts are so easy. 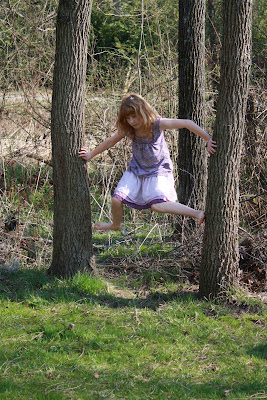 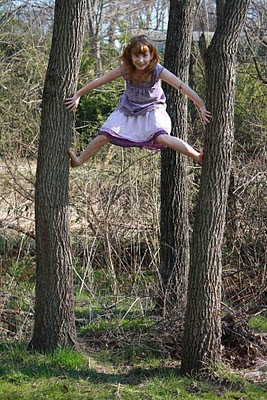 She has been HIGHER believe it or not... I just did not get it in a picture. 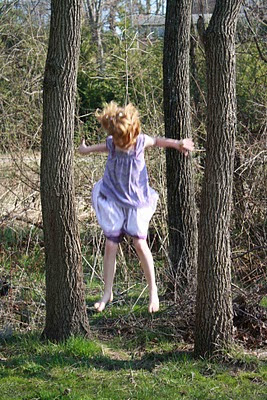 A fairy drifting down.... 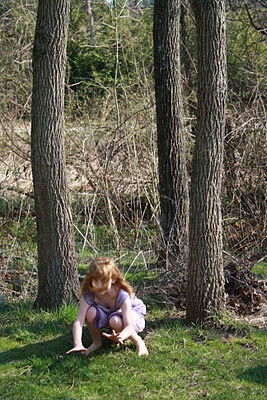 Most likely I do not need to but before this sordid tale I need to say a bit about our family. (disclaimer) We are a pretty conservative Christian family, we do not watch tv (we do watch movies), we are picky about what movies we allow the kids to watch especially A~man, we do not have any questionable magazines around....etc. All that to say our kids are pretty sheltered. ;) On to my tale~

Today we began a spring scavenger hunt. I have a list of things we are checking off that have to do with spring. We were not able to check off everything as it is still pretty early in the season. When we were finishing up our hike for the day Z runs to me and exclaims "A~man says he has naked woman pictures in his POCKET!!" It took me a moment but I realized what he had. When we go to the store...get a newspaper...get our junkmail he likes to pick fliers out and collect them in his room. In the mail last week I had gotten a coupon/advertisement for Victorias Secrets. It had these coupon cards (sortof like a grocery store coupon card) from Victoria Secrets with ladies in the underwear/bra on it. I remember seeing them but didn't realize he was carrying them around in his pocket. OK I admit...at the time I did not think it was funny...but telling my hubby the story tonight....I couldn't help but laugh. I didn't make a huge deal about it at the time but I did make him give them to me...and I threw them in a trash can. I could just picture at our next homeschool activity (TOMORROW) when he is out of earshot whipping them out to show the boys...or telling them he had "naked women cards" in his pocket. Oh I KNOW that would have happened...... :)
Posted by Hills N Valleys at 9:06 PM 2 comments:

my dark cloud is gone!!

It's been awhile since I've blogged! I've just been in a bit of a funk all around. I do not like to do a post and complain, complain, complain. It's just one of those times when you realize your attitude is out of whack all around...where you would just like to crawl under a rock for awhile till something positive happens. Of course when I look at the big picture...life is good...I just hate experiencing the potholes of life all at once. Most likely it's time for ME to make something positive happen. :)

I have started back drawing...so that is a plus...I need to start back sewing too as those things tend to make me smile. (well as long as the sewing machine is cooperating) I have so many things to finish sewing though that it weighs me down.

Not sure if this happens with other homeschool families but now is the time when I start thinking...."hmmmm you know what? I have not done nearly enough______. " fill in blank with a subject or two. Or worrying about the fact a child is behind in one subject. With ds he naturally is but it is so darn discouraging when I think he's GOT something...and a month later it's gone. Or worrying that dd (who doesn't have sn's) is behind a year in a subject or two (well if I would have put her in her "grade" as one of the youngest in her class).  Then I catch myself looking at their many positives. Despite the fact my son fails to think before he speaks (I say with a giggle...most times) the child can talk to ANYONE. When he is done talking to them they are visibly touched by HIM...and the way he is. (I CERTAINLY do not have that affect on many people as I am quiet.)  Well...there are a rare few that are just irritated by him but they are rare and far between. And my dear daughter. I've thought about trying to compile a list of every book this child has read. (in my spare time har har) She honestly reads between 2 (not often) to 4 or 5 hours a day.  This has been going on for 4 years and she is 9. SERIOUSLY. I'm not talking piddly books...she has read every age appropriate classic (and many for older kids), every Boxcar children book, Nancy Drew, you name it...she has READ it and sometimes more than once. That is HER thing. Math will come....grammer, history....they will come. (and her reading is most likely helping that as she loves books about more than fiction) She has come a LONG way socially this year....I LOVE it!!!

Oh and more than likely...I have PMS (that's my excuse and I'm sticking to it!) I do not keep track so I do not exactly know. But in my little social world (if you can call that) I am getting flashbacks to 7th grade being the last one picked in PE...and then being pelted in dodge ball. Ok that last part makes me giggle a bit...despite the fact it really happened. (in 7th grade that is...it didn't really happen now ;)

Ok this post has whining, worrying, bragging, and self-pity in it. If you have read this....you deserve a gold star! :)
Posted by Hills N Valleys at 9:53 PM 6 comments: