words I never thought I would hear

A~man is a wonderful and entertaining child and has always been this way. BUT he has had little success with playing with boys his own age. Younger children love to play with him....girls tolerate him....and he has success hanging out with teenagers. It can be very trying (ahahhahah) to listen to him for long periods of time...he talks a lot and makes up stories. It really bothers boys in particular when he starts making up these tall tales they will tell him that he is lying. We... he IS lying but him lying and my 8 yr old typical dev dd is different. Of course I work like crazy trying to get him to either tell the truth or tell people before hand that he is about to say something made up.

Anyway the last two days have been so good for him socially! Two Wed's a month he goes with us to girl scouts and there are two other brothers of Z's friends that come that are similiar age. Yesterday I let him bring my DS (hee hee it being MINE is a whole nother blog ;) and those boys were at his side the whole time and he did a good job sharing and telling them how to play the game. In the past these boys will sometimes hide from him...funny but not because honestly he can be obnoxious.  Think Hammy from Over The Hedge. Then today we went on a field trip to an inflatable play place with our new 4H group. I saw a 10 year old (that we knew a bit years ago) going up to his grandma saying "have you met my friend A~man??" really excited....then I heard another boy from A's cubscout troop saying "I want to play with A~man too!!" I think I put a  kink in my neck turning around both times to see if what I heard was true. NOW if I can get him to understand the concept of playing with all the boys....he kept trying to latch onto just one...and I don't want the kid overwhelmed by it.

Hopefully he will have more "social" days like this.....it gives my heart such warm fuzzies!
Posted by Hills N Valleys at 8:10 PM 2 comments: 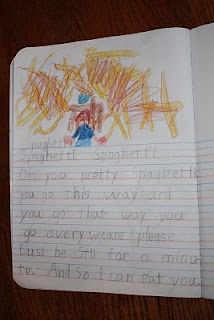 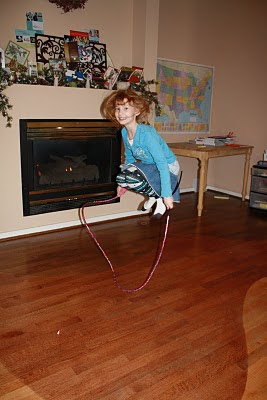 Z~girl and I are in a running program with a local homeschool group. (I can hear my husband snickering about this still...I am NOT a runner I am a hiker) Most days Z does run around our yard a lot but the last couple days we have gotten a lot of rain. So she has been getting the jump rope out and our mini trampoline. She has really not had much interest in jumping till now....she will not stop now. So cute. She has really gotten the hang of it and look at that air under her! Hopefully my cold will be better in the morning as I need to get my hiney on the treadmill. Our first running race is at the end of Feb....only a mile....only a mile. I better start running now! 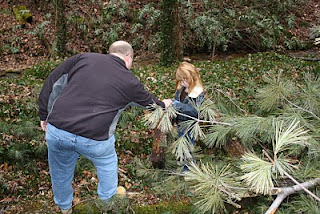 Normally we hike at least 5 times a week....it might be at the same local place sometimes but even before children we like to get outside and walk. The last two months I can count on one hand how many times we have been. Today I just had to. Was the weather nice? No. it was overcast, foggy, with a drizzle. But we headed out to one of our favorite short trails that has one of our letterboxes at it. http://letterboxing.org/ We have NOT been able to find this letterbox for over a year but we keep getting emails that it is being found. Finally we found it! well some kind soul has spruced it up with a new book and stamp. :) It also had two hitchhikers in it. I plan on replacing a missing one of ours that is close driving distance to us and putting the hitchhikers in it.

Hmmm. Makes me think I need to see if some homeschool friends would like to join this neglected hobby of ours.
Posted by Hills N Valleys at 9:26 PM 2 comments: 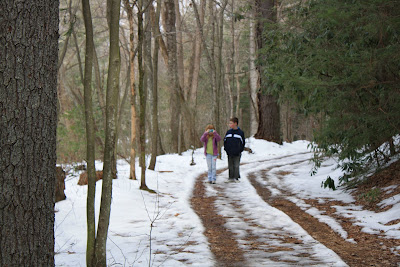 I am taking an online blogging course with the most awesome teacher...(brown nosing a bit but she is AWESOME I'm telling ya). Anyway to my subscribers.....if you see a new name it will be me. Maybe I should add a random picture just for fun-

This is from a recent hike....we still had snow after a month!
Posted by Hills N Valleys at 7:26 PM 4 comments: