Thinking of traveling across South Dakota? (Part I)

Awhile back a friend of mine that homeschools mentioned that she would like to visit SD this summer so I thought as a former South Dakotan (is that a word?) I would do a post on some of my favorite places. I'm also hoping to make a South Dakota lapbook this next year for a potential vacation next summer.  Traveling across the country is a wonderful addition to homeschool curriculum and online US learning games in learning more about the geography and history of our great country. Most of the places I have been to are the Black Hills, Badlands and surrounding areas. OK I'm also a bit homesick as I have not been able to go to SD in a few years.

Let's start in eastern SD. The largest city in SD is Sioux Falls. I admit I have only been there a couple of times that I can remember but it is known for it's hospitality and is located on the prairie of the Great Plains at the junction of Interstate 90 and Insterstate 29. I do remember as a teen going there shopping as it has a large mall. (the things we remember from our childhood hahah)

The next notable place I would like to mention as we travel down Interstate 90 is Mitchell. In this small town is located the Corn Palace. This was originally created in 1892 as a place for early settlers to display what they had grown. It was a way to prove the fertility of South Dakota soil. Every year the outside is stripped down so new murals can be put up yearly. They use the inside for community events and sporting events. 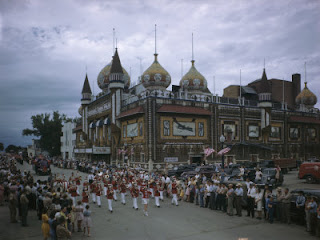 Next traveling a bit north/west is the state capital which is Pierre. Now I am going to tell you the correct way to pronounce it. I have not run into many people from outside this state that can correctly pronounce it. It is pronounced PEER. Most believe it is pronounced like its french spelling but it is not. (can you tell this is a pet peeve of mine? hahah) Pierre and Fort Pierre are the two oldest settlements in SD. You can actually stand in the very site where Lewis and Clark met the Teton Sioux. I remember going to the state capital building in 8th grade and being amazed.


Continuing west keeping your eyes open as you may see one of these jumping across the prairie. 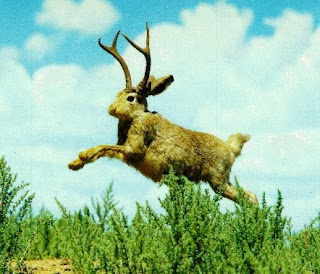 OK I admit after living there for 20 years I never saw a jackalope. I'm embarassed to admit it took many years until I realized they were not real. (or are they?) 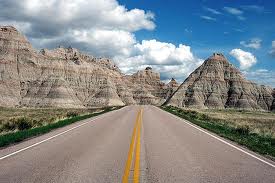 The next place I would like to show you heading west is the Badlands. 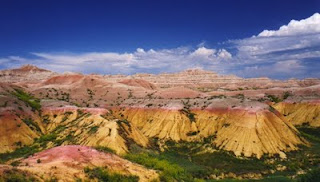 I grew up about a half hour from the Badlands. I have fond memories of riding horses in this area. Also I remember going in our pasture halfway between the Badlands and the Black Hills and finding arrow heads. I look back at that in amazement! If you go from one side of the state to the other it is amazing the changes in terrain. I do not think ranger programs were available when I was a child but hopefully soon I can take my children on a guided tour of this beautiful terrain. By now if you are traveling in the summer you might be getting thirsty.

HAVE YOU DUG WALL DRUG? Have you ever seen a sign or bumper sticker advertising Wall Drug?  Yes that is very cheesey but I admit as an adult now if I see a bumper sticker (and I have even in NC) that I just have to smile. Every summer my parents would take me and some of my nieces and nephews off to explore Wall Drug. It advertised FREE ICE WATER. But in reality as a child I went there for the delicious donuts and the backyard full of crazy animal and people figures.I also got some pretty nifty souvineirs whenever we went there.

Stayed tuned for part 2 of traveling across South Dakota!
Posted by Hills N Valleys at 3:45 PM