Review~Rhythm of Handwriting from Logic of English

Recently A~man and I were able to try out and review the book The Rhythm of Handwriting Manuscript from Logic of English. Handwriting does not come easily with my son due to his disability so I was very excited to try it out. At 13 he already knows how to form his letters and write some words (he does better with keyboarding) but he was definitely in need of a refresher as some of his letters have gotten a bit sloppy. 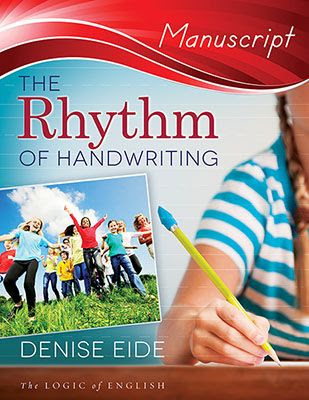 The Rhythm of Handwriting uses a multisensory approach in teaching the basics of handwriting. Each lesson starts with the child using large motor skill movements before they even start writing in the book. The child is shown how to cultivate the muscle memory needed to form each letter. The child is shown when to pause so they are not pausing at a time that causes the letters not to be formed correctly. To create mastery the letters are ordered by their initial strokes. These are:

They suggest for children age 6 and under learning one letter a day. Each lesson should include:
For children ages 7 and up they present several possible schedules.

Schedule 1- Learning 2 letters a day starting with lowercase
Schedule 2- Learning 4 letters (this is the one I used with my son as he was already familiar with forming letters)
Schedule 3- Learn all the letters based upon one initial stroke a day.

I have to say I really liked the format of this writing curriculum. Due to my son's sometimes short attention span it works great because we were able to complete it daily in 15 minutes and because it wasn't laborious in length he was very cooperative in practicing his handwriting. I especially liked how in the front of the book it had a section called Ideas For Handwriting Practice that had numerous ways to help our child learn to write. I was familiar with a few of them as when my son was in occupational therapy his therapist had him do them.

The price of a printed student book is $18 (which is what I received) or the PDF version which is $15. The Quick Reference is available for $10.

Click on the graphic below to read more reviews from Logic of English.