Cathedral of Learning of Pittsburgh PA

This past week we took a long weekend trip to see our niece who works and goes to school in Pittsburgh PA. We have been planning this trip for a long time but a few times it was looking like we would not be able to go but thankfully we were! We have not been on a vacation in a long time. It was an added bonus that our tour guide was our beautiful niece. The kids enjoyed seeing their cousin too!

On Saturday she took us to the Cathedral of Learning. I expected it to be neat but had no idea how very cool it was! Here is a photo of the outside and a photo from the highest point we were allowed to go to which I believe was the 36th floor. (it has 42 floors) 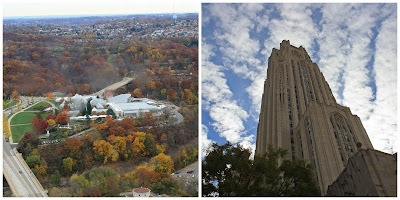 It is an impressive 535-foot-tall Gothic Revival skyscraper that was commissioned by Pitt Chancellor John G. Bowman in 1921. Different local industries donated much of what was needed to build the great Cathedral. Each room on the first and third floors were designed to represent the cultures of various ethnic groups that settled in Allegheny County.


In addition to its magnificent four-story Commons Room at ground level, the 42-story Cathedral houses classrooms (including the internationally renowned Nationality Classrooms) academic and administrative offices, libraries, computer labs, a theater, a print shop, and a food court.

In 2007, on the 70th anniversary of the Cathedral's dedication, Pitt trustees approved a project to clean and restore the iconic building. Its interior has since been upgraded and its limestone exterior scrubbed of  industrial grime.

A landmark listed in the National Register of Historic Places, the 535-foot-tall Cathedral is the second-tallest educational building in the world after the University of Moscow's main building. In recent years, families of peregrine falcons have nested atop the Cathedral. (borrowed this tidbit from this website)

College classes are still held in the rooms during the week but on the weekends they are open to be toured by tourists...such as ourselves. Each room is decorated as a classroom from a different country, including the desks, windows, blackboards, and art. Often there were displays of artifacts that were actually from each country. 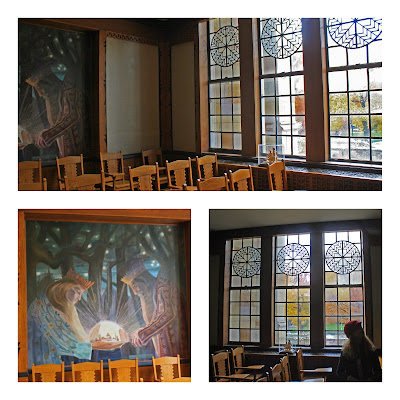 This particular room I think was my favorite. It was the Lithuanian room. The art on the wall (The Two Kings), designs of the windows and desks truly drew me in! Here is a great link to tour this room and all of the others virtually. 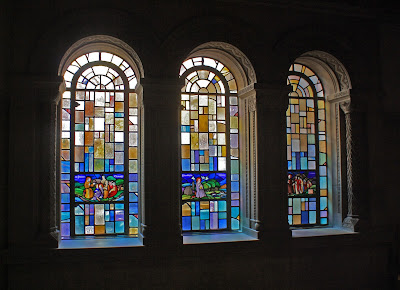 I only wish I would have somehow taken notes on which room each picture I took was in. I LOVED these windows with the fall trees reflected behind. 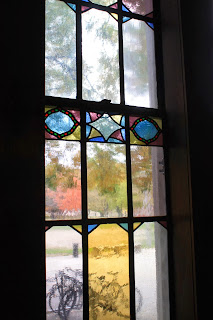 We were also able to meet our nieces boyfriend. He passed my A~man test....he is a very nice young man and earned 4 stars with how he interacted with my often quirky son. 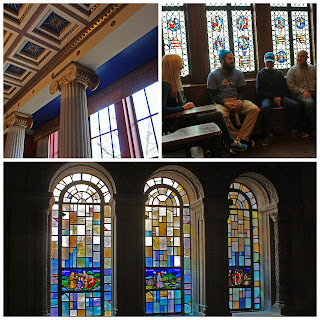 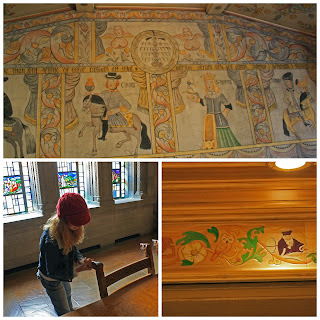 The chair Z~girl is touching had dog heads at the top...this dog bit her finger. ;) 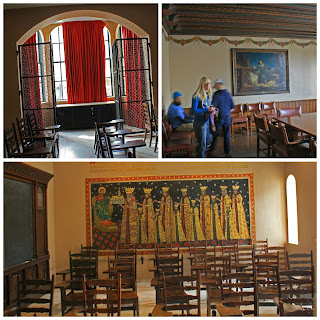 I will try and come back and update this blog entry with which room the photos were located in. For now I am playing catch up at home. We will be taking a break from school this week as we haven't had a break (except for a day or two) since we started at the beginning of August. I will be getting caught up with lesson planning for the next couple of weeks leading up to Thanksgiving. A~man will be working on learning about heat energy and I'm debating starting Z~girl with a new homeschool writing curriulum.

Oh and we returned home yesterday just in time to have dinner with grandma and grandpa! They are in the process of moving here from the Midwest and are having to make several trips to bring there stuff down south. They left this morning but will be back in a couple more weeks!

I have a lot of cleaning to do. Things sure do get messy when you pack/unpack for a trip. Plus...our dog was rather ornery for our dog sitter that came to our house during the day. He ran away, ate something he shouldn't, and left us a lovely surprise to clean up in A~man's bedroom. *gag* In A's words "It is a disaster in there."
Posted by Hills N Valleys at 9:24 AM