The Friday after Thanksgiving we were awoken to what felt like a nightmare at the time. We had slept in until 9 am with little worries as we have an alarm that will go off loudly when our son opens his door. So who was knocking at our front door? I stayed in bed while my husband deactivated the hall alarm and answered the door. A sheriff and a social worker from DSS stood there telling my husband that they had our son, A~man, in their patrol car. He told them that they must be mistaken as he had to deactivate the alarm to even answer the door. WRONG. He walked out the door to see our son in the backseat.

He woke up before it was light out and crawled out his window without a coat or shoes. It was cold that morning!! This is something I would have never dreamed he could even do physically let alone the fact that he is afraid of the dark and cannot stand walking outside barefoot. He walked down our street, across a fairly busy road, (it was black Friday!) and into a different neighborhood.

He knocked on someones's door. Why did he pick that house? Because they had three mopeds parked in their driveway and he loves mopeds. Fortunately, the lady, (who was a mom) had worked with people with autism before. My husband went back and talked with the lady the next day. Oddly he refused food for a LONG time saying he couldn't. He told the lady what medicines he is on and that he is allergic to peanuts. He also made up a HUGE story saying that his parents lived in Texas and that he (A~man) had been living in a tent for awhile. The story was quite grand and unbelievable.  For a long time he wouldn't tell anyone his last name or our names. Finally they were able to get my name out of him and they did a search of some type and found our address.(BTW he has known our address since he was 5)

The nightmare continued. He refused to come in our home!! I'm not sure what the social worker told him but he fed on it. After the social worker talked with us she figured out quick that he lived in a safe environment. He somehow thought though that he was moving out. My only thoughts are that he knew he made a terrible choice and that we would be mad and scared like he had never seen before. He did not know how we were going to react and quite honestly we were so confounded we didn't know how to react. We were able to give the social worker the name of our old social worker (when he was a foster baby) and the name of our old guardian ad litem. We are in contact with both periodically and they know us. The woman and the sheriff were very kind I will say.

After they left he was acting very strangely. He was packing up all of his stuff and bringing it to the front door. He was pacing back and forth. He was convinced someone was coming to get him. He kept trying give stuff away to his sister like his picture and his Micky Mouse. (he LOVES his Micky Mouse) This completely shattered my heart into a million pieces! Both hubby and I put everything we have into raising both kids and I felt a rejection I have never felt coming from A~man. This went on for probably 4 hours. I had to follow him everywhere as I was afraid he was going to bolt. Meanwhile hubby had to go into work for a short time and Z~girl was very confused and upset. We were very close to taking him to the ER as he was really scaring us.

Finally, after he kept falling asleep in a chair I was able to persuade him into taking a nap with me. He slept for over two hours and when he woke up it was as if nothing had happened at all. That same day my husband went to the Lowes and bought a window alarm. We talked to A~man about how worried we were and that he could have been seriously hurt crossing the street. I NEVER let him cross the street without us beside him as he does not pay attention enough to notice a car and his reaction if he saw one would be too slow. I also told him that not everyone is nice and he could have went to someone's house that was not nice. He doesn't get this at all. He will argue with me that everyone is nice and that no one would hurt him. I am just thankful God was watching out for him. Would he try this again if given a chance? Yes. He refused food at first but ended up having Poptarts, Mountain Dew, and some candy bars, and that is just from the lady at the house he went to. The police also gave him some cheese crackers.

What did I learn in all of this? I learned that things can go terribly wrong even when you feel like you have everything under control. If someone before this was to ask me if A~man would try and run away I would have laughed in their face. I also had a few very supportive friends I was texting through it all and they helped me from totally losing it. One even brought a us a meal over that night! I have dear friends near and far that I am so thankful for.

PLEASE, if you are reading this and have a child with Autism or Prader-willi Syndrome, do not underestimate what they may potentially do. I'm not saying to constantly be worried, (this is something I have to work on not doing!) but to instead be proactive. It's been about 6 months since we put up our hall alarm and it is something I wish we would have done YEARS ago. Finally, after years I can get a goods night sleep. (although I'm dealing with guilt that I was sleeping too well not to hear him go out the window) Put a window alarm if you know you have an overly impulsive and curious child. An expensive alarm that went throughout our home would be nice but we bought our hallway alarm for under 30.00 and the one we recently put on our window was even less than that.

I feel like I'm still trying to get over the trauma of that day. I remember my hubby kept telling me, Don't think about the what if's, but that has been impossible. Every time I worry though I think of this picture...and can see A~man's guardian angels guiding him across the road to safety. Also, here is a helpful link on Strategies and Tips for Dealing with Running/Elopement Behavior that I found on the PWSA website. 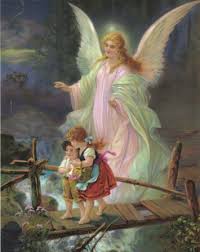